MMS310
Systems Alliance frigates, named after the great battles of human history, are among the larger warships capable of traveling between star systems in the interactive world of Mass Effect. Smaller combat support craft, fighters, and interceptors are used in a support role to the warships during combat. Fighters are a one-man craft used to perform close-range attacks on enemy ships. One of these is the SX3 Alliance Fighter. 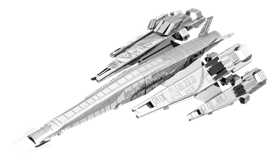 MMS312
The turians are a race in Mass Effect, members of the Citadel Council and known for their military role, particularly their contribution of starships to the Citadel fleet.